Intel has taken the wraps off three new 9th Gen desktop Core CPUs for gamers and mainstream users, as well as a new range of Core X-Series CPUs and also a Xeon consumer workstation CPU for extremely demanding content creators. The highlight of the new 9th Gen lineup is the Core i9-9900K with eight cores and a top speed of 5GHz, which the company is calling “the world’s best gaming processor”. Intel also showed off motherboards from Asus, Gigabyte, MSI and ASRock based on a new desktop platform controller, the Z390, to go along with the 9th Gen Core processors.

The new Core i9-9900K marks the first time that Intel is using its Core i9 brand for a mainstream desktop CPU, supplanting the usual top-spec Core i7 model. It has eight cores with Hyper-Threading, for 16 total threads. The base speed is 3.6GHz and the single-core boost speed is 5GHz. The company is calling this the first “broad-volume” 5GHz CPU. There’s also a 16MB cache and dual-channel DDR4 RAM support. The rated TDP is 95W, and Intel points out that compared to the Core i7-8700K, the new Core i9-9900K has more cores with similar frequencies running within the same thermal envelope.

Intel claims that gaming performance is improved by up to 10 percent compared to the previous generation and up to 37 percent compared to a three-year-old PC. Similarly, video editing with Adobe Premiere is up to 34 percent and 97 percent faster respectively, as per Intel’s own testing. The company demonstrated a single PC with a Core i9-9900K running two games in separate virtual machines simultaneously, but gaming while encoding and streaming is a more likely usage scenario. This processor ships in a new dodecahedron-shaped box which Intel thinks buyers will want to show off. 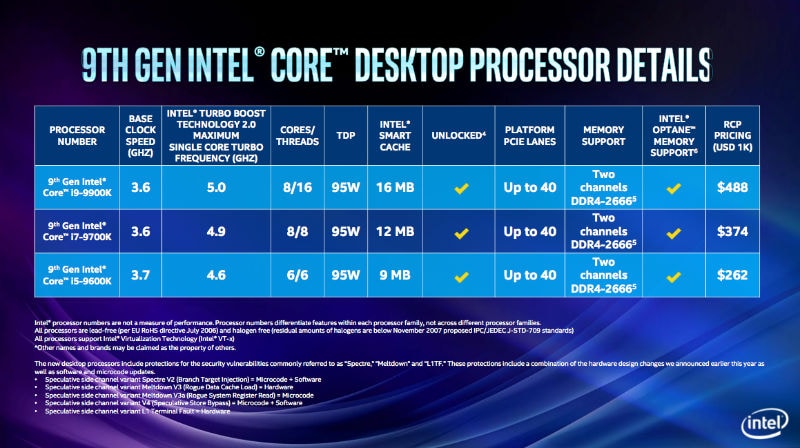 Joining this flagship model are the Core i7-9700K and the Core i5-9600K. The Core i7 model interestingly has eight cores, compared to six with the Core i7-8700K, but this model lacks Hyper-Threading which means that the total thread count has actually declined from 12 to eight. This processor has base and boost speeds of 3.6GHz and 4.9GHz, with a 12MB cache. The Core i5-9600K has six cores, also without Hyper-Threading. The base and boost speeds are 3.7GHz and 4.6GHz respectively, and the cache comes in at 9MB.

All three 9th Gen Core desktop CPUs are based on the existing Coffee Lake architecture and use an optimised 14nm manufacturing process that Intel calls 14nm++. All three also feature hardware mitigations for the high-profile Spectre and Meltdown vulnerabilities that affect multiple generations of Intel CPUs. They have 95W TDPs and are multiplier unlocked for easy overclocking. They all support dual-channel DDR4 RAM and Intel Optane Memory. They will be backwards compatible with existing Intel Z370 motherboards as well as the new Z390 models that will be releasing.

Intel’s new lineup of Core X-series processors consists of seven new models with between eight and 18 cores, for different kinds of users whose workloads might not always be able to take advantage of multiple threads. These processors all use the Skylake-X architecture much like the first-gen X-series. Unlike the previous series, they all support quad-channel DDR4 RAM and have the same 165W TDPs as well as support for up to 68 PCIe lanes including those arising from the chipset. 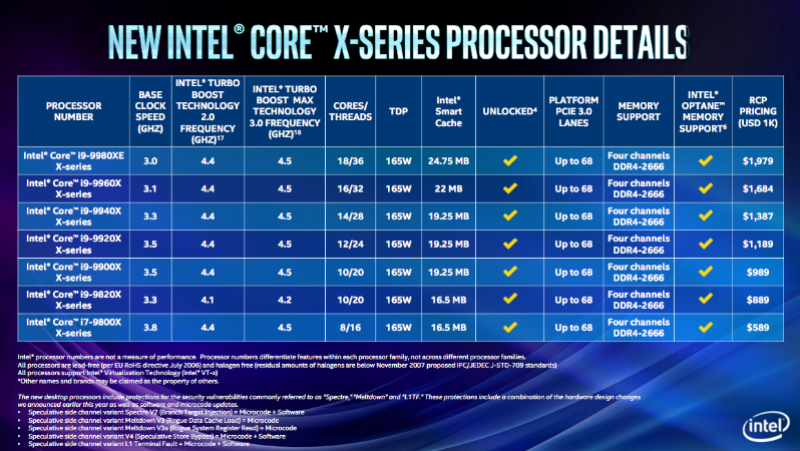 The top-end Core i9-9980XE has 18 cores and 36 threads. The base speed is 3GHz and boost speed is 4.45GHz, and Intel’s Turbo Boost Max 3.0 feature pushes that to 4.5GHz on demand. In a direct reference to AMD’s 32-core Threadripper 2990WX, Intel asserted that its use of a unified memory architecture means that cache access is low-latency, uniform, and predictable, because the cache is not split across multiple core complexes.

Finally, Intel disclosed some details of its upcoming 28-core Xeon W-3175X processor which is aimed at workstation-class content creation workloads such as industrial design and cinema-quality video rendering. The single-core boost speed is 4.3GHz, and there’s a 38.5MB cache. This CPU will support up to 512GB of ECC DDR4 RAM in six channels. No further details were announced. This processor will ship in December 2018.

Tubi: Everything you need to know about the free movie and TV streaming service

Photosynth returns as a feature in Microsoft’s Pix camera app

Apple's change of plan: iPhones and iPads will use Imagination chip designs after all

3 pillars of the most successful tech products

Want to be a pro gamer? This is what you could earn playing Overwatch

Qualcomm Targets Wi-Fi Market in Push to Expand Beyond Phones

Good VR is great — and bad VR is abysmal

You’ll Never Run Out Of Storage With This 400 GB SanDisk MicroSD Card, But It Sure Costs A Lot

13 Popular Photography Portfolio Sites Ranked from Best to Most Frustrating

Cole: Social distance and the miles ahead (and behind) us

False start: the Tokyo Olympics dates shift to 2021 due to coronavirus concerns

Apple to start online sales in India in Q3 this year

Apple Card: release date and all we know about the new iPhone-centric credit card

Diwali Gift Ideas for the Gadget-Lovers in Your Life

How to get a good camera deal on Black Friday